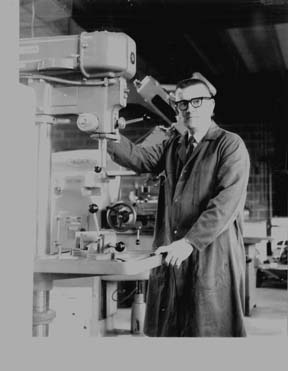 Richard E. Krohn was born and raised in Chicago, Illinois.  His family moved to Centerville, Michigan for his senior year but in March, he was drafted into the service where he served for 2 ½ years during World War II.  Krohn began his collegiate career at Western Michigan in 1946 and graduated in 1950.  He also earned his Masters Degree from WMU in 1958.

Krohn began his teaching career at Litchfield in the 1950-51 school year and after his first year, Dick married the former Beryl Hitchcock on June 16, 1951.  The Krohns have two children, Steve and Janis.  Steve is a teacher at Hillsdale High and is married to the former Patti Langs of Jonesvile.  They have made Beryl and Dick grandparents three times.  Janis is married to Jim White and she is employed at Albion Starr Commonwealth.  Both children are also
graduates of Western Michigan.

During his first three years at Litchfield, Dick taught his Industrial Arts-Shop program in the back half of a barn presently owned by the Gene Vagg family.  Being discouraged with the facilities, Krohn took an Industrial Arts position with the Olivet school system in the 1953-54 school year.

After the 1953-54 year, Litchfield convinced Krohn than Litchfield was the place for him or maybe more accurately, Litchfield was convinced that the young people of town would be the big winners if they could sway him back.  With the promise of a new shop building in hand, which he drew up the plans for himself, Krohn returned for the 1954-55 school year and he has been a mainstay of the staff ever since.

As mentioned before, Krohn’s skills as an architect were put to work to draw up the plans for his general shop building, which also included space for the Agriculture classrooms.  During the 60’s and 70’s, Mr. and Mrs. Herald P. Arnt, Jr. presented Dick and the school system with many generous gifts that provided many metal machines and tools.

Krohn was always very concerned about his students’ safety and in the 35 years of supervising many dangerous machines, there has been only 13 stitches for various cuts and no missing fingers.  Together with his students, they developed a thorough safety program in line with the Michigan Occupational Safety and Health Act.

Mr. Krohn’s third love no doubt, beyond his family and occupation, is athletics.  This writer’s first acquaintance with the man was back in the mid 50’s when he was the summer recreation director and also an outstanding third baseman for the local fast pitch softball team.  Over the years, he has handled almost every coaching position in the system.  He coached junior high football for 12 years; junior high basketball 9 years; and junior high track 1 year.  In high school, he was a football assistant for 2 years; JV basketball 1 year; varsity basketball 1 year; varsity baseball 4 years; and varsity golf for 11 years.

Probably his proudest moment as a coach was his year of varsity basketball in the 1964-65 school year.  He built a powerful unit that was undefeated in 14 games in the old “Little C” conference, won a district tournament title before losing in the regionals to eventual state champion, Covert.

During his many years as golf coach, Krohn had available a new set of clubs for any player that wanted to participate but didn’t have the funds for clubs through a generous gift of the Nelson B. Purdy family.

In the more recent years, Dick has held the position of assistant athletic director.  The primary responsibility being preparation of the playing facility.  How many times I have seen him being the last to leave the football field after shutting up the press box and turning off the lights or at basketball games, supervising his students in cleaning up under the bleachers.  Going far beyond the guidelines of his job never bothered Dick.  It had to be right.

Litchfield Athletic Booster Club will be forever grateful.  Once again he brought his architectural talents into play a few years back to draw up the plans which are now the beautiful football and track facility we now enjoy.  More recently, he drew up plans for a storage-bathroom building, which will be built this summer adajacent to the refreshment stand.

If anybody is unhappy with the driving habits of most people in the community, they should contact Mr. Krohn as he has also been a Driver’s Training instructor for the past 35 years.

Dick has also found time to serve his community.  In the late 60’s, he was on a nine member panel that developed the present City Charter.  More recently, he has served on the city planning commission.

Throughout their many years here, Beryl and Dick have been active members of the United Methodist Church.  Mr. Krohn has served on the pastor parish committee and has been a trustee.

If Richard Krohn was nothing else to our school system, he was dedicated.  In the 35 years of teaching he was absent from his post just two days, unbelievable!

As you may have noticed through this article, I have referred to Mr. Krohn in many ways, for instance Richard or Dick, etc.  This man had so much of my respect as a youngster that I still have trouble to this day of saying something other than Mr. Krohn.  Speaking for every student that ever was involved with Mr. Krohn, I guess that is the one thing we will always remember, respect for each other.